Why does Connecticut have a "panhandle" that extends westward toward New York?

Under an agreement with the Dutch in 1650, the western boundary of Connecticut was to extend northward from the west side of Greenwich Bay "provided the said line come not within 10 miles of Hudson River." 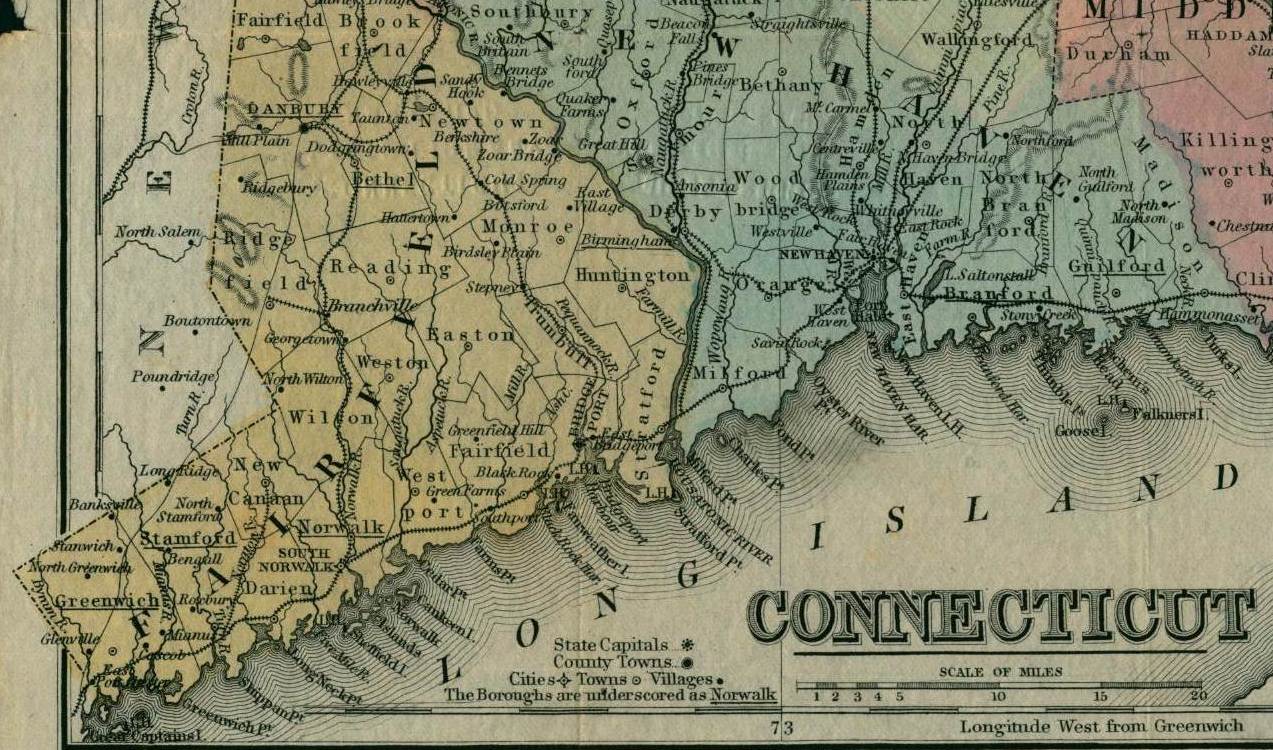 The Charter of 1662 granted Connecticut territory westward to the "South Sea" (i.e., Pacific Ocean). However, a patent granted on March 12, 1664 gave the Duke of York "all the land from the west side of Connecticut River to the east side of Delaware Bay." In October 1664 Connecticut sent commissioners to New York to resolve the conflicting claims. The resulting agreement placed Long Island under New York jurisdiction and established the boundary between Connecticut and New York as a line to run from the Mamaroneck River "north-northwest to the line of the Massachusetts." The resulting line would have crossed the Hudson River near Peekskill and met the boundary of Massachusetts near the northwest corner of what is now Ulster County, New York. However, the 1664 line was never surveyed, confirmed by the King, or accepted by New York. Boundary disputes continued between the two colonies. Settlers in what became the present towns of Greenwich, Stamford, New Canaan, and Darien were politically aligned with the colony of Connecticut, rather than New York. However, the Governor of New York, which also claimed the territory, issued arrest warrants for some residents of Greenwich, Rye, and Stamford, and in May 1682 New Yorkers began a settlement above Tarrytown in what Connecticut considered its territory.

Under a new agreement of November 28, 1683 the boundary between Connecticut and New York was generally recognized as a line parallel to and twenty miles from the Hudson River north to the Massachusetts line. However, New York, acknowledging most of Connecticut's settlements in Fairfield County, gave up a claims to a 61,660 acre rectangle east of the Byram River, which became the area sometimes referred to as Connecticut's "panhandle" or the "handle of the cleaver". In return, Connecticut gave up its claims to Rye and ceded to New York a strip of land 580 rods (1.81 miles) wide "equivalent" to the area of the panhandle that extended north from Ridgefield along Dutchess, Putnam, and Westchester Counties, New York, to the Massachusetts line. This territory came to be known as "The Oblong". The Oblong has acquired the reputation of being a genealogical "black hole". Some information may be included among records of the 'parent' Connecticut towns and other information may in New York town and/or county records, but some families residing in The Oblong appear to have been missed by both states.