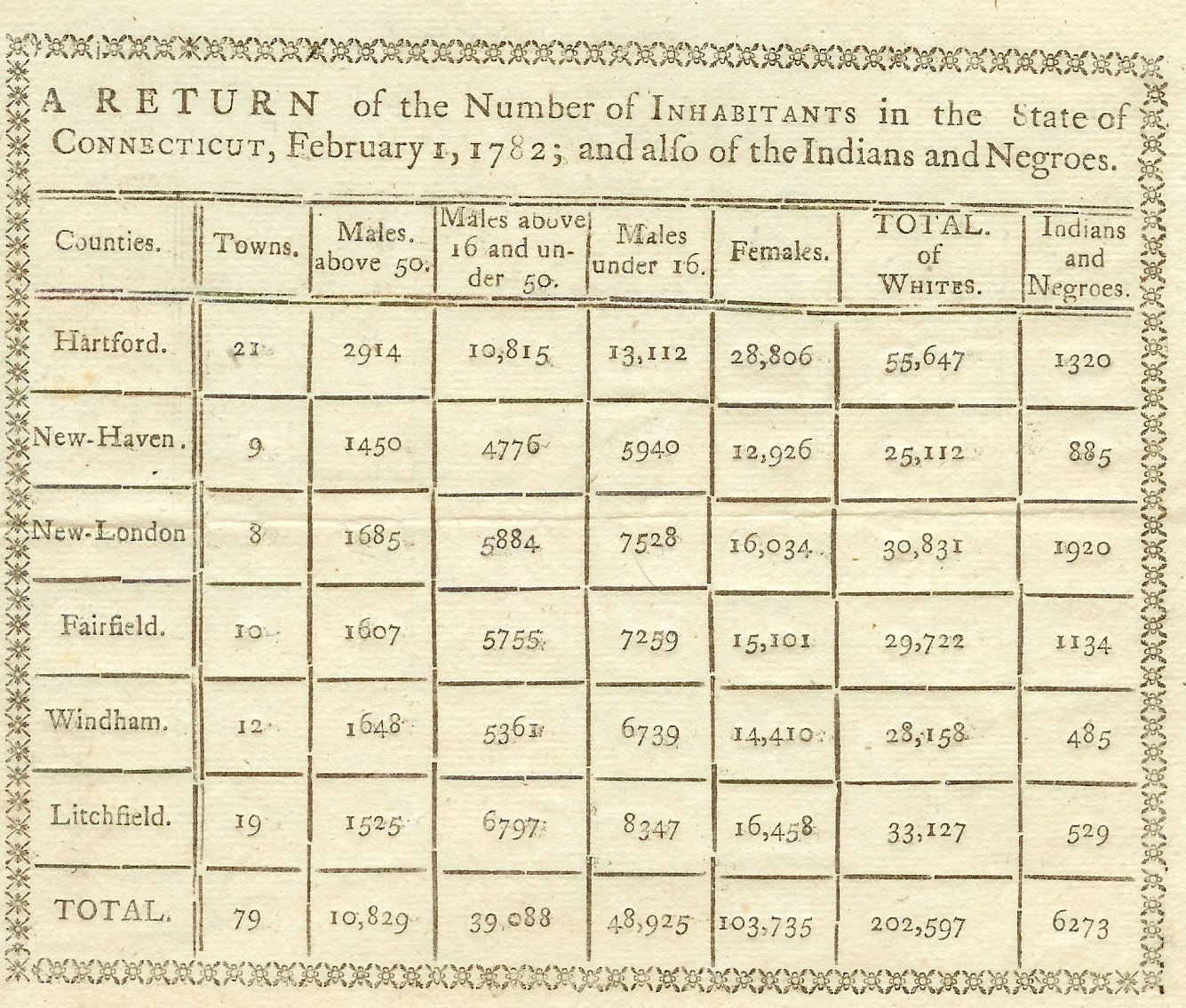 For more information about census records, such as special enumerations, and to see what questions were asked each census year, please see our main Census Guide.

1669/1670
"Grain Inventory for Hartford, Wethersfield, and Windsor". This inventory includes the names of the head of the household and the number of family members, as well as the number of bushels of wheat and Indian corn held by each family. It has been published in The Wyllys Papers, Collections of the Connecticut Historical Society, volume 21 (1924), pp. 190-199 [CSL call number F 91 .C7 vol. 21].

A more complete listing of Connecticut's inhabitants ca. 1670 is found in:

Other 17th Century EnumerationsRough population figures for adult males for the years 1671, 1676, 1677, 1678, and 1679 based on annual lists of persons and estates supplied to the General Assembly are found in the Public Records of the Colony of Connecticut, volume 3, pages 290-300 [CSL call number HistRef ConnDoc G25].

1756
"An Account of the Number of Inhabitants as returned in 1756." This is the first census of the colony considered to be fairly reliable and covers all six of the counties then in existence. It includes the number of "inhabitants" in each town by race (whites, "Negroes", and "Indians"). The schedule is printed in the Public Records of the Colony of Connecticut, volume 14, p. 492 [CSL call number HistRef ConnDoc G25 1772/75] and in A Century of Population Growth, p. 164 [CSL call number HA 214 .A5 1909 oversize].

1762
This census was taken by the selectmen of the colony's sixty-eight towns. The letter ordering the compilation is found in the Trumbull Papers,volume 2, document 7, pages "a" and "b". The resolution providing that selectmen of each town report the number of men in each training company appears in Connecticut Archives: Militia, Second Series, document 332.

A copy of the actual census is in the Ezra Stiles Miscellaneous Papers, number 299, at the Beinecke Library, Yale University. A contemporary manuscript copy is at the Connecticut Historical Society, 1 Elizabeth St., Hartford, CT 06105.

For an article describing this census and a reproduction of the census tables, see:

The resolution ordering this census to be taken appears in the Public Records of the Colony of Connecticut, volume 15, pp. 312-13 [CSL call number HistRef ConnDoc G25 1775/76] as well as in Connecticut Archives: Revolutionary War, First Series, volume 4, document 111. It was to be an "exact account of all the persons in their respective towns in this Colony, as well as negros or slaves for life as white persons, distinguishing the number of those who are under the age of twenty years from those who are above that age, the sexes, or whether married or single, those in the militia, and all able bodied men who do not belong to the militia, also those who are now in actual service...."

The form of the enumeration schedule is shown in Connecticut Archives: Revolutionary War, First Series, volume IV, document 111, page "a". Ebenezer Watson's bill for printing the resolve is found on document 328, pages "a" and "b" of the same volume. Most of the actual schedules do not appear to have survived, but scattered references to the returns from individual towns include:

The Trumbull Papers, volume IX, document 236, pages "a" - "d" includes "An Account of the Inhabitants in the Several Towns in the State of Connecticut, in years 177[ ] and 1779 with Increase & Decrease". This document lists the total population for 177[ ] by town and county but does not break down the population by age, sex, or race. The population of Westmoreland in 177[ ] is also listed. In Connecticut Sources for Family Historians [CSL call number HistRef Z 1265 .S67 F93], author Kip Sperry does not indicate that the final digit is missing and gives the year of the 177[ ] census as 1776. The totals for the population given for each town in the 177[ ] census do not match the totals for 1774, while the total population figure for Middletown given in the 177[ ] census does match the Middletown total provided in the schedule printed in The History of Middlesex County. This suggests that the figures provided in the Trumbull Papers are, in fact, the population totals for each town from the missing 1776 census.

"Return giving an account of the names of the families; number of persons in each family; number of bushels of wheat, and other grain; weight of flour and meal, etc., in the East Society in Norwich, Conn., April 29, 1779, made according to the Act of the General Court of Connecticut in April 1779" [CSL call number Main Vault 973.3 A28]. This seems to be a surviving fragment of the 1779 grain census.

For a copy of the act entitled, "AN Act for ascertaining the Quantity of Grain, Flour and Meal in this State and thereof to make provision for an immediate Supply of Bread for the Army and the necessitous inhabitants of the State, and for securing other necessary articles for the Army, see Records of the State of Connecticut, Volume II (1778-1780), pages 224-227 [CSL call number HistRef ConnDoc G 25 1776 v. 2].

See also "An Account of the Inhabitants in the Several Towns in the State of Connecticut, in years 177[ ] and 1779 with Increase & Decrease" in the Trumbull Papers, volume IX, document 236, pages "a" - "d" described under 1776, above, which provides population figures for each town from the 1776 and 1779 censuses.

1782
"A return of the Number of inhabitants in the State of Connecticut, February 1, 1782; and also of the Indians and Negroes." The original manuscript, (linked below) found in the Trumbull Papers, Main Vault 974.6 T76, volume XXIV, document 178, includes totals for each town for the number of males above 50 years of age; males above 16 and under 50; males under 16; females; and "Blacks", i.e., the combined total of "Indians" and "Negroes". A printed summary is in the State Library's Broadside collection (see image at the top of the page). 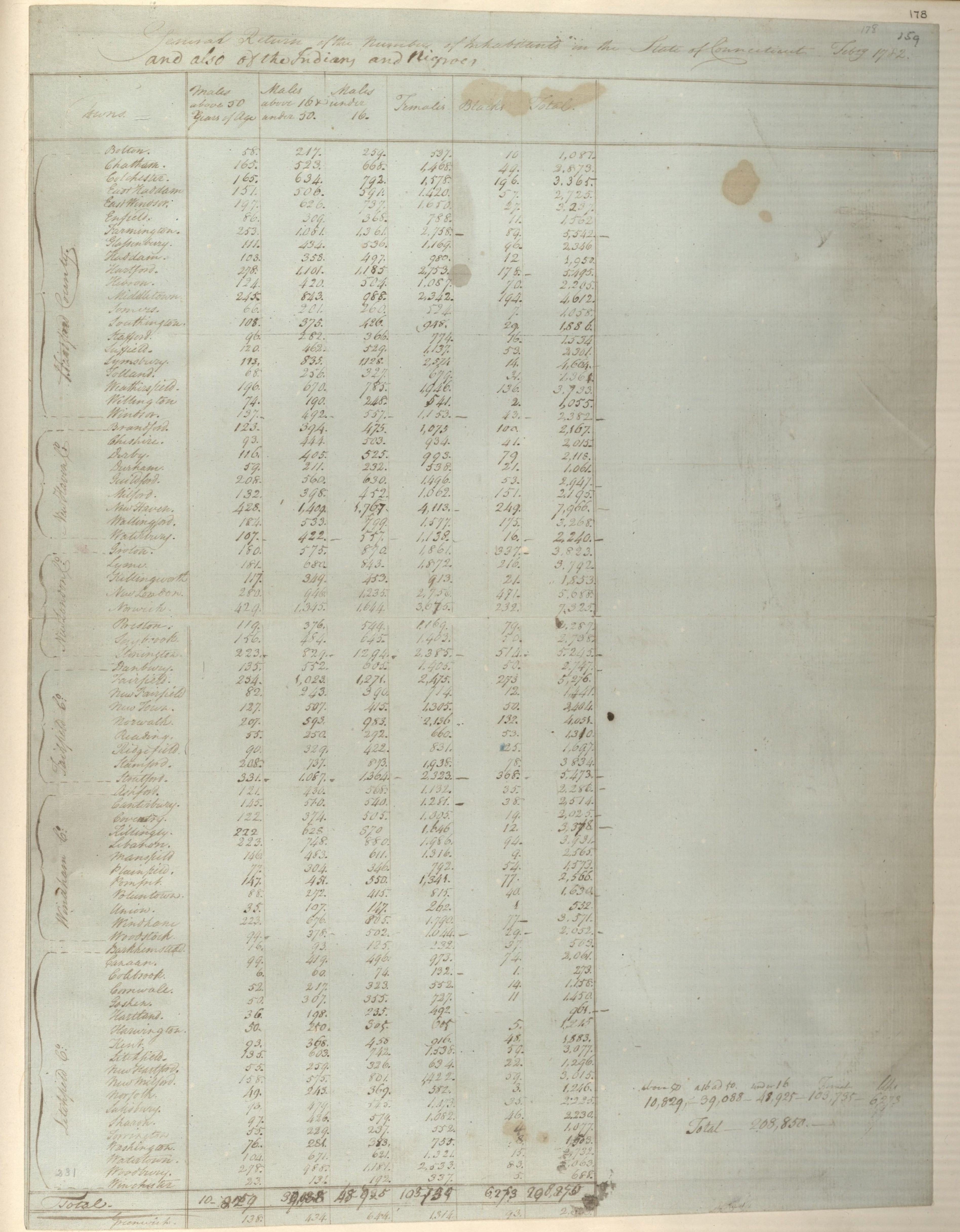 1798
1798 Direct Tax of Connecticut. This document is located at the Connecticut Historical Society. For further information, please contact that institution.

1821
School Census of Glastonbury, Connecticut. This census is used as an illustration of a school census on pages 113 and 122 of The Source, edited by Arlene Eakle and Johni Cerni [CSL call number HistRef CS 49 .S65 1984]. However, the example is misleading as this document covers only the First School Society of Glastonbury. The original manuscript is in the State Library's Main Vault [CSL call number 974.62 G46s], but it has been microfilmed by the Genealogical Society of Utah and should be available through LDS Family History Centers.