Resources for studying African-American Heritage at the CT State Library 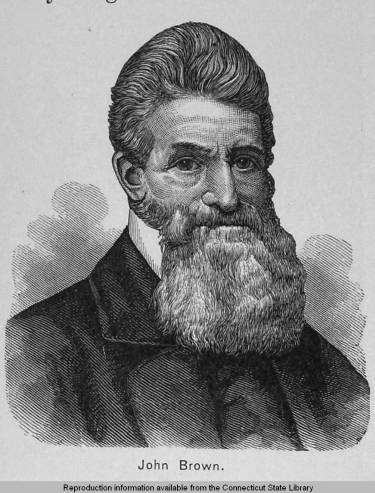 John Brown was born May 9, 1800 in West Torringford (now Torrington) to Owen and Ruth (Mills) Brown. He came from a long established family, with ties back to English Puritans. The house burned down in 1918, and in 1932 a monument was erected on the site. In 2000 the “Torrington Historical Society acquired the birthplace property in merger with the John Brown Association. Shortly after that, the Historical Society with support from the CT Humanities developed an interpretive plan for the birthplace.” In 2003 the site was placed on the State Register of Historic Places. A block in the Freedom Quilt represents John Brown’s contribution. Today you can visit the location of his birth place as part of The Connecticut Freedom Trail.

The family moved to Ohio in 1805. At 16, John Brown returned to New England to attend preparatory school in Massachusetts, but soon transferred to the Morris Academy in Litchfield. The Morris Academy was a progressive school that was controversial back in 1790 for the open door policy of coeducation.[i] Brown’s plan to become a Congregational minister was sidelined by financial and vision issues that forced him to quit school and return to Ohio.[ii]

John Brown is most famous for his armed raid on the U.S. Armory and Arsenal at Harper’s Ferry, but that was just one part of his crusade to abolish slavery. In 1837 he publicly dedicated his life to the end of slavery. Already an abolitionist, his move to Springfield, MA marked an increase in his activism. He lived and worshiped with Black and White alike. At this time he began formulating ideas for the Subterranean Pass Way, a series of mountain bases for the Underground Railroad and from where armed parties could attack slave holders. He continued his work in North Elba, NY and around the country. Brown went to Hartford and sought out Augustus Washington, a famous African American photographer. It is now housed in the National Portrait Gallery, being the earliest known portrait of John Brown and possibly the earliest surviving image from Washington’s Hartford studio.

In 1855, he went to Kansas in response to the Nebraska-Kansas Act and the pro-slavery people who were also moving to Kansas. In 1856 he was involved in a violent retaliation for the killing of free settlers in Kansas and that resulted in death of five pro-slavery men. On October 16, 1859, John Brown led his infamous attack at Harper’s Ferry and was captured on October 18th. He was severely wounded, and was brought into the court house on a stretcher. Charged with conspiring with slaves to commit treason and murder, Brown was tried, convicted, and executed by the state of Virginia, even though the crime was under federal jurisdiction. John Brown was convicted November 2 and hung on December 2, 1859. In the intervening days, he wrote many letters to encourage the abolitionist movement and discussed his impending death as working for God’s will. For some, he was a martyr who died to free enslaved people; for others, he was a violent criminal.

By 1862, “John Brown’s Body” being sung and whistled all over the North.[iii] This is the song we now know as The Battle Hymn of the Republic, a song with lyrics that have changed over time. The Library of Congress has resources exploring this song, with links to song sheets and even a 1917 vocal performance.[iv]