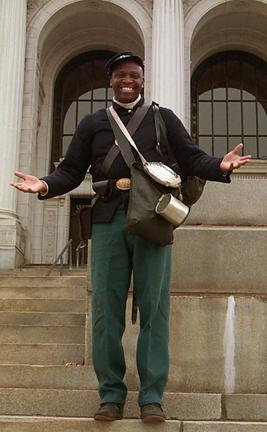 Evidence suggests that Private William Riley Webb was born about 1834 in Hartford, Connecticut, to Eloise Johnson. His father’s first name is unknown. Eloise married Edwin Salisbury on November 24, 1836, in Hartford. Eloise and Edwin also had a daughter Emerett. Emerett married Benjamin Franklin Roberts, a member of a prominent African-American publishing family in the Boston, Massachusetts area. Eloise and Edwin eventually moved to the Boston area.

In 1855, Webb committed a crime and was sent to the Wethersfield State prison where he spent four years.

William Webb enlisted in Company F of Twenty-Ninth (Colored) Regiment, Connecticut Volunteer Infantry on Dec. 22, 1863. He was mustered into the organization on March 8, 1864. He was discharged on March 9, 1865 after suffering an eye injury which resulted in vision loss.

William Webb married Augusta E. Madison of Ellington, on March 12, 1864. They were married in New Haven before the 29th left the state.  Augusta and William had no children. William passed away in 1868. His estate was probated at the Ellington District Probate Court. Augusta died at the age of 19 on April 3, 1868.

Kevin Johnson’s portrayal of Webb is told from an emotional and exciting first-person perspective that vividly illustrates the struggle of the African-Americans in the Colored Infantry during the Civil War. He tells of his early life in Hartford, his recruitment and training, and the traumatic final battles of the Civil War. The presentation is based on extensive research in the collections of the Connecticut State Library and the Museum of Connecticut History.

Kevin Johnson is an employee of the State Library’s History and Genealogy Unit. He has been presenting William Webb for more than twenty years and has given over 600 presentations in schools, libraries, historical societies and other venues around the state.

If your organization is interested in reserving a performance, please contact State Library staff at (860) 757-6580 for availability. Performances may not be open to the public. Please contact the sponsoring organization for more information.

Organizations who would like to videotape or broadcast a performance must submit a 'Permission to Publish' form in advance. A link to the form is provided below. For information about completed forms, please contact Carolyn Picciano at (860) 757-6580.